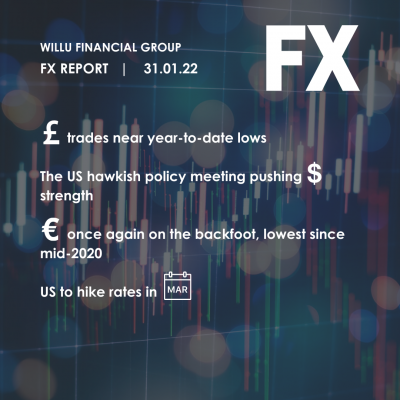 Sterling declined for the second week running last week, breaking back below the 1.34 mark, and trading to new year-to-date lows. Significant dollar demand was the primary catalyst, as a result of the Fed’s hawkish policy meeting, though ongoing domestic political uncertainty coupled with a continued deterioration in risk appetite also contributed. This week, Thursday’s Bank of England decision highlights the calendar, with the MPC set to hike rates by 25bps, and begin the process of running down the Bank’s balance sheet. That said, the Bank are likely to pushback on the market pricing of 5 rate hikes this year, potentially creating a ‘buy the rumour, sell the fact’ reaction for sterling pairs.

The common currency sank to its lowest level since summer 2020 last week, notching its biggest weekly decline in just over 7 months, as a result of the hawkish Fed decision, and expectation that rates will remain sub-zero in the bloc for the foreseeable future. Now trading below 1.12, widening US-E/Z policy divergence should keep the EUR under considerable pressure over the coming weeks; with the UK-E/Z divergence also likely to widen, putting the bulls in control of GBP/EUR. Looking ahead, the ECB’s latest policy decision is this week’s calendar highlight, with policymakers set to maintain as dovish a policy stance as ever; the latest GDP and CPI figures are also due.

The Fed struck a hawkish note last week, signalling the first 25bps rate hike of the cycle will come in March, while refusing to rule out the possibility of raising rates at each of the remaining 7 meetings this year. Consequently, the dollar jumped, having its best week in half a year against a basket of peers, and trading to its strongest levels since the summer of 2020. Markets, however, may have moved too far too fast, leaving the potential for disappointment high if the Fed were to U-turn away from the hawkish stance adopted last week, if inflation were to fade more rapidly than expected. This week, remarks from Fed speakers will be the primary focus, though Friday’s labour market data – particularly the earnings component – will also be closely watched.

The US dollar continues to strengthen on the expectation that the Federal Reserve will raise rates more aggressively than previously expected. Many US banks are predicting a record 5 interest rate hikes this year with some to be more aggressive in terms of the number of basis point increase it will see. This comes as rumours spread that the Bank of England will raise rates 3 times this year making it the quickest tightening in a quarter century.

The past weekend saw Russia continuing to boost their troop levels on the Ukrainian border. Russia have now over 100,000 troops and equipment amassed on the border with Ukraine according to the Pentagon as the crisis reaches boiling point. The US and UK are preparing further sanctions on Russia that target President Putin and his close associates.

Sergio Mattarella was re-elected as Italy’s president. The cross-party vote saw many rounds as initially no winner could be announced, but the former outgoing president has been elected against the bookie’s expectation, with many believing Mario Draghi would win the race for the Presidency. It’s not over for Draghi however, as he is expected to remain as Prime Minister.