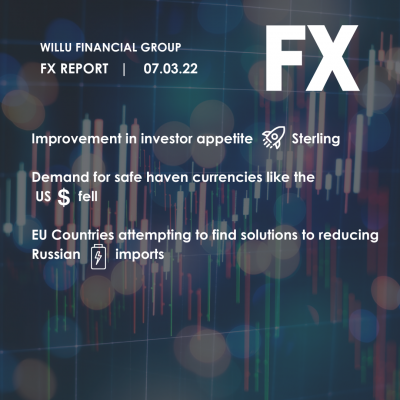 The pound performed well last week, gaining more than 1% against the dollar, and notching its first weekly advance in four, boucing convincingly from the YTD lows set towards the end of the prior trading week.

Sterling’s turnaround came amid a broad improvement in investors’ risk appetite, though did threaten to be derailed after a dovish 25bps rate hike from the BoE last Thursday.

The MPC adopted a more cautious tone with regards to future policy tightening as a result of uncertainties posed by conflict in Ukraine, with a pause in the hiking cycle likely after the May meeting.

Looking ahead, another busy week awaits, including the latest inflation and retail sales figures, the monthly PMI surveys, and Chancellor Sunak delivering his ‘Spring Statement’, likely focusing on the cost of living crunch.

The common currency also traded well last week, notching its first weekly gain against the greenback since the ECB’s hawkish surprise in February, primarily benefitting from the market’s reduced demand for safe-havens.

Despite the EUR’s advance, we continue to trade below important psychological resistance around the 1.11 handle, which the bulls have thus far been unable to break above.

This week, the eurozone economic calendar is relatively light, with only the aforementioned PMI surveys of note.

Amid signs of success in peace talks, demand for safe havens fell last week, resulting in the greenback losing ground against a basket of peers for the first week in six.

Fallout from the latest Fed decision also posed headwinds for the USD, with markets having bought the hawkish rumour, then selling the fact after Powell & Co announced the expected 25bps rate hike.

Looking ahead, there are as many as 17 Fed speakers on the docket this week, including Chair Powell (twice), all of whom will be closely watched for hints on the monetary policy outlook, particularly the possibility of a 50bps rate hike at the next meeting in May.

EU Leaders disagree in how the Bloc deal with the soaring price of energy. Many leaders want direct intervention from the EU’s wholesale energy market, as calls to replenish depleted natural gas storage and help for retail customers. Water has come to an agreement with Germany to supply liquified natural gas as Germany seeks to reduce its reliance on Russian energy imports, with UK Prime Minister leading calls to turn to Nuclear and Wind energy.

US President Joe Biden is set to call leaders of France, Germany, Italy, and the UK to discuss working together on further responses to the Russian invasion of Ukraine. President Biden plans to also meet executives at large corporations who have seen an impact on their business since the invasion and sanctions began.

Companies are starting to throw out planned fund-raising deals, as the credit market remains unstable following Russia’s invasion of Ukraine. Electric car giant Tesla postponed a $1 billion  of bonds backed by leases on vehicles last week. Nearly 80 companies have put at least $25 billion of deals on hold since the start of the conflict a month ago.