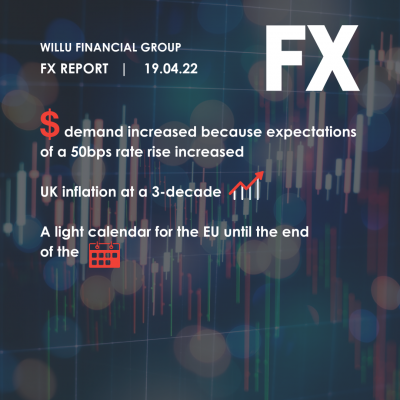 Sterling managed its first weekly gain in three last week, despite broad USD demand across the board, though remains vulnerable with GBP bulls having been unable to force cable significantly north of 1.30.

Continued dovish BoE expectations, despite a new 3-decade high inflation reading, continue to make a GBP bull case difficult to put together, with a pause in the present tightening cycle likely after the May MPC decision.

Looking ahead, this week is a relatively light one for UK data releases, with only the latest ‘flash’ PMIs and retail sales figures due, both out on Friday.

The ECB made a dovish pivot last week, emphasising the growth headwinds facing the eurozone economy, in addition to stressing the importance of longer-run inflation forecasts when setting policy, denting market expectations that rates would begin to rise this year.

Consequently, the common currency faced stiff headwinds, slipping to back-to-back weekly losses, and falling to its lowest level in almost two years against the USD.

Looking ahead, as with the UK, a light calendar awaits this week, with only Thursday’s final March inflation print of note.

The greenback remains the ‘pick of the bunch’ in G10 FX, with various FOMC policymakers continuing to raise expectations of a 50bps rate increase in a little over two weeks’ time, including typically dovish NY Fed President John Williams.

This continued hawkish rhetoric saw the dollar notch a second straight weekly gain against a basket of peers last week, taking the DXY to its highest levels since the pandemic began in March 2020.

This week, said jumbo rate hike expectations are likely to be cemented when Fed Chair Powell speaks on Thursday, though the calendar is otherwise devoid of interesting releases.

Citing the Russian conflict in Ukraine, the World Bank has downgraded 2022 global growth outlook and warned of further downgrades due to ‘exceptional uncertainty’. The World Bank Chief Carmen Reinhart has warned of further increases to energy prices and as a result inflation around the world is expecting to rise, transport costs for suppliers could also see a rise as transportation costs increase putting the pressure on suppliers and consumers alike.

US Federal Reserve member Bullard has said a 75 basis-point hike could be an option if it is needed, as the US dollar strengthens again. Inflation data for the US last week showed a larger increase compared to the month previous of around 0.4%. Bullard, who is a hawkish member of the Federal Reserve has also said talk of a recession is pre-mature citing the strength and resilience of the US economy.