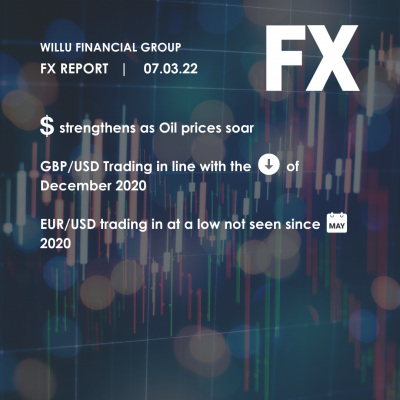 Last week was a dismal one for the GBP, with the pound sinking to its lowest levels of the year against the greenback, amid a broad deterioration in risk appetite, as markets continued to focus on Russia’s invasion of Ukraine

From a technical standpoint, there is little by way of support between spot and the 1.30 mark, with only December’s 1.3165 lows of note

Looking ahead, the bears are likely to remain in control of the GBP again this week, with the UK economic calendar quiet, and investors’ attention again set to remain on the worsening geopolitical situation.

Amid rising geopolitical risks, and intensifying clashes in Ukraine, markets displayed a clear preference for safety last week, benefitting the USD (as well as the JPY and CHF)

Against a basket of peers, the dollar rose to near 2-year highs, with the DXY inching ever nearer to 100, a level at which sever financial stress is likely to be faced across the board

This week, Thursday’s inflation data is the main event, with headline CPI set to rise by 8% YoY, and increase further as a result of Russian sanctions, piling additional pressure on the Fed to strike a hawkish tone on 16 March.

The common currency also fared poorly last week, falling victim to sizeable haven-led dollar demand, while also facing headwinds as a result of the ECB’s steady shift back towards a more dovish than priced policy stance

– Consequently, the EUR tumbled beneath 1.10, to its lowest levels since summer 2020, with common currency bulls capitulating as the week progressed

– Looking ahead, Thursday’s ECB decision is this week’s main event, though any comfort for the common currency is unlikely, given how gradual the exit from monetary stimulus is likely to be.

European stocks are expecting to join a global sell-off when they open this morning, as the US contemplates a ban on Russian oil which is driving the oil price higher. Asian markets entered a bear market which the Ukrainian-Russian conflict continuing to take centre stage for markets.

US President Joe Biden is considering banning Russian oil imports to the US without participation of allies in Europe. The oil price as a result has surged again as Brent touches $139 a barrel and crude break through $130 a barrel. It is worrying news for Europe who will feel that further sanctions are needed because of the escalation in the Ukrainian conflict, however as they rely on Russia (25% of their oil imports and 40% of their gas imports come from Russia) they will be looking to the US for ways to reduce their reliance on Russia.

Goldman Sachs is relocating some staff out of Russia as businesses react to a shut off Russia’s economy after the invasion of Ukraine. Netflix is also removing its operations in Russia, with no new customers able to sign up. Visa and Mastercard also suspended operations, with Russia now looking at alternative care providers for the public such as Mir or China’s UnionPay.