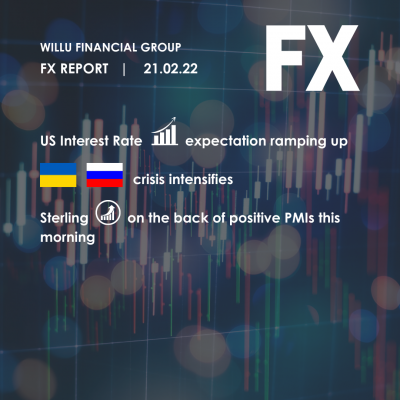 Sterling just about ended last week in positive territory, notching a third straight weekly gain, despite risk appetite remaining shaky as investors continued to focus on mounting tensions between Russia and Ukraine. That said, from a technical standpoint, cable remains in a tight range between its 50-day moving average (to the downside), and the 200-day (to the upside), with the market showing little desire to budge from this, roughly, 2 cent wide band.

Looking ahead, this week’s main event comes on Wednesday, when four BoE policymakers will testify to MPs on the January inflation report, potentially providing some hints on the policy outlook. Meanwhile, the latest PMI surveys are due today (Monday), providing further colour on the pace of the economic recovery, in addition to the persistence of price pressures in various parts of the economy.

The common currency was rather rangebound last week, trading in a tight 1 big figure range, albeit with a modest bearish bias as hawkish impetus from the February ECB meeting continued to fade. With attention remaining on Ukraine tensions, the common currency could be vulnerable to further downside, particularly given the reliance of numerous European nations on Russian gas. This week, the calendar is on the quiet side, besides PMI data due today, there is little of interest.

The greenback attracted some haven demand last week, allowing the currency to rally despite a decline in Treasury yields, with the dollar index rising above the psychologically important 96 handle, and the 50-day moving average.

Away from Russia-Ukraine tensions, analysts appear to be rapidly ramping up their expectations for Fed rate hikes, with JPMorgan now calling for consecutive 25bps hikes at the next 9 meetings; more hawkish than even money markets price at present. Looking ahead, in light of the above, Fed speakers are likely to be the main thing to watch this week, though investors will also continue headline-chasing amid persisting, and mounting, geopolitical tensions.

UK Prime Minister Boris Johnson is expecting to announce an end to Covid-19 regulations today. The Cabinet is due to meet later today to discuss and finalise the ‘Living with Covid’ plan which will allow the public to return to normality after a difficult period in the world’s history. Partially driven by the success of the vaccination programme, it allows the UK to consider lifting all remaining legal restrictions.

US President Joe Biden and Russian President Vladimir Putin have accepted a proposal by France for a diplomatic summit, offering a renewed hope that diplomatic efforts can end the Ukrainian-Russian crisis. US officials have said the summit will go ahead as long as Russia does not invade Ukraine which will focus on stability in the region. A second summit is also planned with those involved in the crisis.

JPMorgan economists are expecting the US Federal Reserve to raise interest rates by 25 basis points at nine consecutive meetings as they try to clamp down on inflation. The move will be against current market expectations, which believes the Fed will be a lot more aggressive in their interest rate hikes, some rumoured to be 100 basis points in the next meeting.