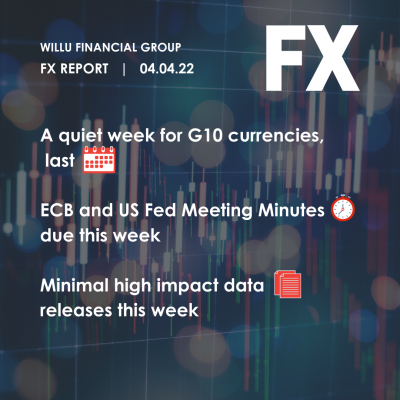 Sterling, in keeping with other G10 currencies, had a fairly quiet week last week, with cable happy to trade within a tight 1.30 – 1.32 range, amid a lack of major data catalysts, and continued diminishing market interest in the war in Ukraine.

Nonetheless, despite somewhat listless conditions, last week did represent the pound’s first losing week in three, though the bears cannot be said to be firmly in control unless and until the 1.30 handle gives way.

Looking ahead, this week’s economic calendar is on the light side, with no notable UK releases scheduled, and only a handful of BoE speakers to provide anything of interest for market participants.

The common currency was almost as rangebound as the GBP last week, with the bulls unable to sustain a brief trip north of $1.11, and the EUR rapidly settling back into its recent trading range.

Despite this, the resilient nature of the EUR continues to surprise, though is likely emblematic of how the market’s focus is increasingly shifting away from geopolitics, and towards monetary policy.

On that note, this week’s eurozone economic highlight will be the release of minutes from the latest ECB meeting on Thursday, which are likely to be closely examined for hints on how, and when, the ECB will withdraw stimulus.

The greenback traded broadly flat against most major peers last week, making a significant move only against the JPY, with USD/JPY surging to 7-year highs, amid another jump in front-end Treasury yields.

Friday’s US labour market report has kept the hawks in the driving seat in the US bond market, confirming that the jobs market continues to recover at a healthy pace, raising the chances of more aggressive Fed action to tame inflation at coming meetings.

Looking ahead, minutes from the March FOMC meeting are this week’s major event, due Wednesday evening, while the latest US services PMI report will also be worth a close look.

European states are calling on the Bloc to impose further sanctions against Russia n response to potential war crimes in Ukraine. The European commission is already looking at ways to close off loopholes in the current system which will also strengthen existing sanctions whilst also increasing the list of sanctioned individuals. This comes as reports circulate that Russian troops executed unarmed civilians in Ukrainian towns.

China is attempting to combat rises in Covid-19 cases as financial centres such as Shanghai enter lockdown restrictions. A surge in new cases and reports of fresh sub-strains as cases rise nationwide. Businesses and factories in Shanghai remain closed including Tesla’s Shanghai plant which is closed for a second-straight week.