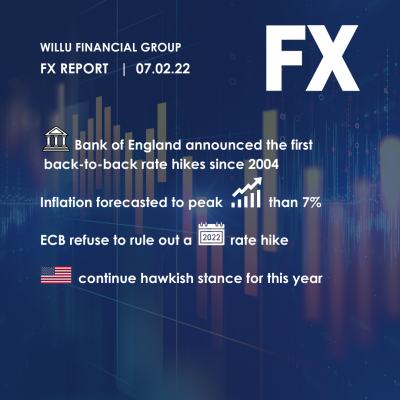 The Bank of England announced the first back-to-back rate hikes since 2004 on Thursday, raising Bank Rate by a further 25bps, to 0.5%, while also kicking off the process of reducing the size of the balance sheet (quantitative tightening). The decision itself was more hawkish than expected, with four MPC members voting for an immediate 50bps rate increase, and the MPC forecasting that inflation will peak well north of 7% this year. Nevertheless, the pound was unable to take full advantage of the Bank’s hawks being let loose, ending the week with only a modest advance against the dollar, and deep into the red against the common currency. This week, the only notable data release is Friday’s fourth quarter GDP report, with attention also likely to fall on any potential further comments from BoE policymakers.

As with the BoE, the ECB hawkishly surprised markets last week. Despite keeping all policy settings unchanged, President Lagarde struck a hawkish note at the press conference, refusing to rule out the possibility of a hike this year, while flagging significant upside risks to the inflation outlook. The common currency reacted positively to this, chalking up its best weekly advance since March 2020, as money markets moved to price a sizeable 40bps worth of rate hikes by year-end. This week, the calendar is light, with no major economic releases scheduled.

Markets continue to price an aggressive pace of Fed rate hikes, more than five by year-end, with Friday’s solid payrolls report spurring further such bets. Employment rose by 467k in January, while participation rose to a new cycle high, and earnings continued to surge, fuelling concern over a wage-price spiral to which the Fed may have to respond aggressively. Despite this, and the new cycle highs printed across the Treasury yield curve, the dollar was unable to rally significantly, perhaps a sign that the bears may soon wrestle full control of proceedings. This week, the January CPI inflation report will be the market’s primary focus, with a hotter than expected print likely to spur further bets on the Fed hiking 50bps in March.

After 5 resignations in 24 hours last week, UK Prime Minister has moved to fill the key positions. Steve Barclay who was a cabinet office minister has moved to Chief of Staff, Guto Harri a former mayoral aide to Boris Johnson is now the new Director of Communications. The moves will be key for the UK Prime Minister who attempts to cling onto power as he faces a growing party rebellion.

US President Joe Biden and his French counterpart Emmanuel Macron spoke by phone about responding to the Russian military build-up on the Ukrainian border, as further US reinforcements deployed to Poland and Germany. Emmanuel Macron is due to visit Moscow and Kyiv this week, as the Ukrainian Defence Minister says the probability of an escalation looks low.

After two-years of strict international border controls, Australia will allow double-vaccinated visa holders to enter the country from the 21st of February. The announcement comes as a final step in their restrictions on tourists and foreign workers that started in November. Borders in Australia have been entirely closed with only a citizens allowed on returning flights since the Pandemic spread in March 2020.