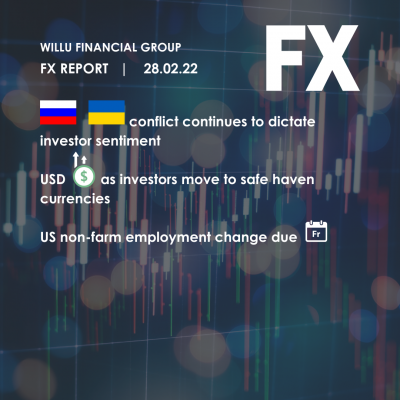 Cable hit its lowest levels this year last week, as Russia’s invasion of Ukraine sparked a ‘flight to safety’, significantly denting the attraction of higher-beta currencies such as the GBP, while also sparking sizeable demand for havens such as the USD. The outlook for the pound is contingent more on geopolitical developments than anything else at present, though hawkish comments from BoE Governor Bailey and colleagues in front of MPs last week did, at least, confirm that the Bank retains a tightening bias. Looking ahead, in terms of scheduled events, there is little of significance this week, besides final readings of February’s manufacturing and services PMIs.

The common currency tumbled to one month towards the middle of last week, a direct result of the dramatic escalation of tensions between Russia and Ukraine. Furthermore, the escalating conflict has seen ECB policymakers begin to make something of a dovish pivot, amid concerns about the impact of sanctions on the bloc’s GDP outlook, despite the inflationary consequences of the recent surge in oil & gas prices. Looking ahead, in a similar manner to the UK, this week’s economic calendar is rather quiet, with only final PMIs, and Wednesday’s ‘flash’ inflation print of note.

Haven demand propelled the greenback to its best levels of the year last week, taking the DXY comfortably north of the 97 handle, with the dollar gaining ground against all of its major peers. The dollar’s gains against the JPY were particularly interesting, given the latter’s typical safe-haven status, which it was unable to take advantage of given the (rather surprising) 10bps weekly rise in 2-year Treasury yields. This week, there are two notable events to keep on the radar; February’s labour market report, and Congressional testimony from Fed Chair Powell. The former is likely to show the labour market remaining tight, with significant upward pressure on earnings persisting. Meanwhile, with regards the latter, investors will pay close attention to comments regarding the size of rate hike to expect next month, as well as the pace at which the Fed plan to run down the balance sheet.

BP moved to remove it’s shares from Russian oil giant Rosneft, as they take a $25 billion hit by helping to isolate the Russian economy. Western nations are pushing to punish President Putin for his invasion of Ukraine, as BP drops their 20% stake. Western corporations are coming under increasing pressure to drop any and all partnerships or ownerships of Russian based companies as the fighting in Ukraine intensifies.

Officials from Ukraine and Russia are planning to meet, as Belarus call both parties to try and arrange diplomatic talks. Ukraine is hesitant to travel to Belarus and have agreed to meet by the Ukrainian-Belarussian border. However, President Zelenskiy does not believe the talks will yield results after Russian President Putin put his nuclear deterrent forces on high alert and Belarus is apparently preparing troops to enter Ukraine.