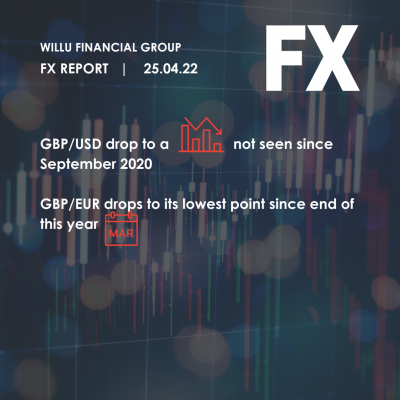 The pound faced something of a perfect storm at the end of last week, with a dismal slate of economic data reinforcing the slowing growth, accelerating inflation backdrop that the UK economy currently faces, denting the chances of significant further tightening from the Bank of England.

Consequently, cable ended the day at its lowest level since September 2020, notching its biggest one-week decline since last summer, slicing through the 1.30 handle like a hot knife through butter.

The GBP was also considerably weaker in the crosses, with GBPEUR dipping beneath 1.19, touching around 3-week lows.

This week, although the data docket is on the light side, the outlook for the GBP remains poor, particularly with USD bulls remaining in control of the broader G10 FX market, and the market likely now to rapidly price out further BoE rate hikes.

Dollar bulls remain in control of the broader G10 FX market, with investors continuing to price around four 50bps Fed hikes by September, and Treasury yields continuing to push significantly higher across the curve.

Against a basket of peers, the USD trades at its strongest levels since March 2020, with gains most significant against lower-yielders, such as the JPY, which plunged to new 2-decade lows last week.

Looking ahead, a busy calendar awaits this week, highlighted by the latest GDP and PCE figures, however the degree of attention that markets will pay to this data is likely to be limited, with focus already shifting towards the next Fed meeting on 4th May.

Amid broad USD demand, the common currency slipped to a third straight weekly loss last week, continuing to trade close to its weakest levels in two years, despite rumours of a hawkish pivot from the ECB, amid increased speculation of rates moving into positive territory before year-end.

The chances of such action, however, appear remote, especially after over a decade of uber-loose monetary policy, thus leaving the EUR vulnerable to a correction lower.

Looking ahead, the eurozone economic calendar is relatively busy this week, including the latest GDP and inflation figures, along with a smattering of business sentiment surveys.

French President Emmanual Macron defeated opposition leader Marine Le Pen in the French presidential election, as Macron pushed a pro-business and EU manifesto. The news has boosted markets, who predicted a Marine Le Pen victory would deliver a shock to the markets like UK’s vote to leave the EU.

China’s coronavirus outbreak worsened as rising cases in Beijing boosted rumours that the capital could be heading towards a lockdown. Chinese policy makers are racing to avert a Shanghai-style crisis that has rocked the region financially and caused delays to shipping.