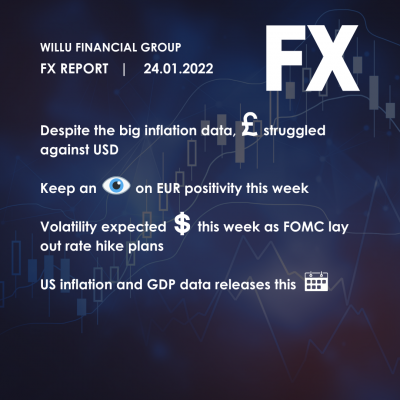 Sterling fared poorly last week, facing headwinds as a result of the broad deterioration in risk appetite, which hit risk-sensitive currencies across the G10 leaderboard. Consequently, the pound lost ground for the first week in five, seeing cable pullback from its 200-day moving average, and move towards a test of the 1.35 handle. This was despite a positive set of labour market data, and the latest inflation figures showing an intensification of price pressures, likely making a 25bps BoE hike next month a near-certainty. Looking ahead, this week’s economic calendar is rather quiet from a UK perspective, with no top-tier releases due, besides Monday’s ‘flash’ PMI data.

The euro softened a touch last week, sliding back beneath the 1.14 handle, albeit in a week where volatility remained rather subdued, and tight trading ranges persisted. Nevertheless, given the market’s preference for the safety of late amid sharp declines on Wall St, it would not be at all surprising for the common currency to resume its recent rally, bearing in mind how favourably investors presently view low-yielders. This week, as with the GBP, the only calendar highlight will be Monday’s ‘flash’ PMI reports.

The greenback finds itself in an interesting spot at the moment; the textbooks would suggest that the USD should appreciate given the risk aversion seen at present, though international outflows from US equities coupled with the market having ‘maxed out’ its bets on hawkish monetary policy are both posing headwinds. As such, trading conditions have become rather choppy, with the market appearing indecisive over which way it next wants to take the currency. This week, Wednesday’s FOMC decision will be the highlight, with policymakers set to lay the foundations for a 25bps rate hike in mid-March, while sounding increasing concern over the persistence and intense nature of inflationary pressures. Also in focus this week will be the first reading on Q4 GDP, as well as the latest PCE inflation data. 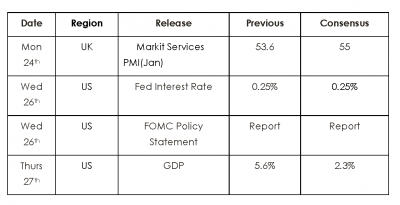 Italian parliamentarians begin casting their votes in a complex secret ballot for a new president, as Silvio Berlusconi pulls out of the running. The election which has over 1,000 delegates voting is expecting to go through several rounds before a successor to Sergio Mattarella is announced. The Frontrunner is Mario Draghi, who has been credited with stabilising Italian politics.

The UK has begun withdrawing staff from the British Embassy in Ukraine, as tensions increase over a possible Russian invasion. The US are taking similar action, citing that a Russian invasion could come “at any time”, as the EU plan to keep staff in place.